The Waynesburg – Franklin Twp. Volunteer Fire Company responded to a reported structure fire at 130 Good Hill Road in Washington Twp on Sunday morning.  The initial call came in at 4:54 AM with many calls coming from vehicles seeing the fire from nearby Interstate 79. Upon arrival the Fire Company found heavy fire conditions to the house and nearby garage.  Extensive damage to both buildings resulted. Mutual aid was provided by the Jefferson Volunteer Fire Company and Amwell Volunteer Fire Company.  The owners of the home were not at home at the time of the fire. The Pennsylvania State Police Fire Marshal is investigating the cause of the fire. 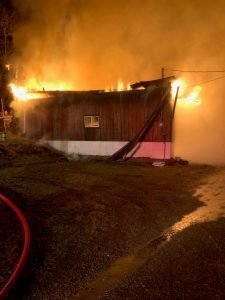